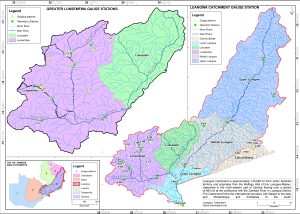 Luangwa Catchment is one of Zambia’s six  Catchment areas. It gets its name from the Luangwa River, which originates in the Mafinga Hills of the Luangwa-Lake Malawi watershed in the north-eastern part of Zambia. It flows over a stretch of 850 km till confluence with the Zambezi River in Luangwa District at Faira. The Luangwa River Catchment (LRC) is approximately 145,690.33 Km2 within Zambian territory and it lies between latitudes 9o30” North and 15o40” South, and between longitudes 28o00” West and 33o45” East. The Luangwa Rive has its sources at an Elevation of over 2100 at Mafinga Hills and ends at an elevation of less than 370 at Feira. This represents the largest drop in elevation of any river in Zambia. The river also has extensive flood plains in some parts that have alluvial aquifers that act as key groundwater sources for the rural population in Eastern Parts of Zambia.
The Luangwa Catchment is the third largest in Zambia after the Zambezi Main River and Kafue Catchments. Administratively it lies in five provinces, namely (largest to smallest in terms of areas): Muchinga, Eastern, Central, Lusaka and Copperbelt.
The Catchment forms the International Boundaries with Malawi to the East, DR Congo to the North West and Mozambique and Zimbabwe to the South. Among the features that defines its extents are watersheds namely the Muchinga Escarpment to the North, the Lake Malawi to the East, Kafue the west, Congo in the North-West and Lower Zambezi in the South.

Natural Environment in the Luangwa Catchment

In comparison to other large Catchments, namely, the Zambezi and Kafue Basins, the Luangwa is the least disturbed. This is supported by the fact that the Luangwa Catchment has sustained and defined ecosystems of a number of critical conservation areas such as National Game Parks, Game Management Areas, National Forests, Forest Reserves and Local Forests. Some of these are listed below;

The human population of the Catchment is low in numbers, mostly clustered in the main urban centres. Subsistence agriculture occurs along the river network in areas with fertile soils. The Catchment is home to two of the prominent commercial agricultural areas in Zambia, namely, the Mkushi/ Chitina Farm Block and Chibombo/ Chisamba Farm Block. In these farm blocks are large-scale irrigation activities that heavily dependent on available water resources. Mkushi/ Chitina Farm Blocks depends on surface water sources from the Lunsemfwa River and its tributaries, whereas Chibombo/ Chisamba Farm Block and some commercial farms around Kabwe relies on Groundwater from some of the highly productive carbonate (Dolomitic) aquifers in Zambia. In addition the carbonate dolomitic aquifer in Kabwe very critical as it is the only sources of municipal water supply for Kabwe Town.
The Catchment also has river that play a critical role in the energy sector of Zambia. For example there are hydropower and other developments that are located mainly on the Lunsemfwa, Lusiwasi and Mulungushi Rivers. This makes the two rivers be among important surface water resources in the Catchment. Other critical surface water resources are those that act as major sources of water for municipal water supply, namely, the Lutembwe of Chipata, Lundazi of Lundazi and Katete of Katete, Lunchu of Kapiri Mposhi, Chiwefwe of Mkushi and Ibolela of Serenje.
Other valued natural resources of economic importance include fish, grazing for cattle and wild plant medicines as well as rich mineral resources for mining projects.

Water demand and Use

An indication of water demand in LRC is provided by the water permit records kept by WARMA. There is no water permits given on the Luangwa main stem, all the permits are implemented on tributary rivers. Water use is mainly for domestic, agriculture, mining and industrial as well as hydropower. The major hydropower schemes in the catchment are Lusiwasi (12 MW) operated by ZESCO; Mita Hills (24 MW) and Mulungushi (32 MW) operated by Lunsemfwa Hydropower Company.